Perhaps childhood should span all the years until we become teenagers, but when I refer to mine I am just talking about the four years of sheer innocence and oblivious self-exploration when I lived on a dead-end block in Blacksburg, Virginia. Everything before that is vague and the years after contained the inescapable torment of junior high and high school. My dad, brother, and I moved out of Berkeley, California when I was six. The three of us loaded into the cab of a U-Haul truck, our days were spent driving through those flat, boring flyover states and our nights in cheap motels. We spent an inauspicious first night in our new home sleeping on blankets on the floor of the master bedroom while a horrifying thunderstorm, the first I’d ever experienced, pounded away on the roof. The next morning brought hope, as I got to move in to my own room for the first time. I can still remember the feel of the slightly raised blue-lined wallpaper and the delight of sleeping in a bed without a bunk, and a brother, above me.

My cherished bedroom window looked out onto Eheart Street, which was short, only two lots long, ours separated from the one below us by a line of pine trees that were actually the Christmas trees of the original owners, planted there in a perfect row every January. The street was also very steep, dead-ending into undeveloped forestland that the neighborhood kids called “the fort.” When my parents went house shopping, I assume they took into account the normal factors, and this house was a real winner, located on quiet streets with many other children our age as neighbors. I’m sure they didn’t factor in how the percent grade of Eheart Street would shape my childhood years there but I can trace almost everything I know about myself to it. Under my window was the driveway, seldom used for its intended purpose as the steepness of the hill made getting our family vehicle, a rusted blue Volkswagen bus, in or out basically impossible. It was lined on one side by birch trees and a small garden, with dogwoods and a huge pine tree, branches perfectly laid out like steps, on the other. As I got used to the weather and seasons and accepted thunderstorms as an inevitable part of summer, as standard as public pools and fireflies to that blissful school-free season, I would climb to the very top of that pine tree and watch the storms roll in. In the winter the birch trees looked like a Robert Frost poem amongst the snow and I would trudge out to peel bark from them to use as paper for my own writings and, once, a letter to my grandfather that he hung proudly on the wall. Spring magically brought tulips and daffodils, still my favorite flowers, and also green leaves and pink blossoms to the dogwood trees about which I would write my first published poem at the age of nine.

I spent one rainy afternoon sitting in the gutter along the hill, rescuing earthworms swept away in the torrent, grabbing them from the choppy waters and flinging them to the safety of my beloved backyard. I was there for hours, content to let the now worm-free water wash over me. I realized at the time the absurdity of my task, but wanted to see it through nonetheless. An adult looking out at me must have wondered how I could be so absorbed in so silly an activity, but I also imagine they were at least a little jealous of the simplicity of my life. At some point I realized I was shivering, freezing after spending hours sitting in the rain-filled gutter. I went inside, feeling triumphant over the hundreds of innocent lives I had saved, and took a long, hot shower. I remember feeling so grown up, as showers had only just recently replaced the usual baths of my younger years.

The gradient of the hill necessitated the design of our sprawling back porch, on which lived my trusty rabbit Furball. It was a concession that he live mostly outside, as my brother is allergic to everything cute and fluffy. Furball loved it though, going feral in the winter and burrowing in the snow. Under the deck grew sour grass and, for a time, pumpkins sprung by the guts of those Jack-o-lanterns we had gleefully thrown to their gruesome demise for our own amusement. In the fall we offered to rake the leaves of our neighbors, collecting them into a monumental pile in the backyard into which we rode our bikes, made all the more thrilling by the steepness of the slope. 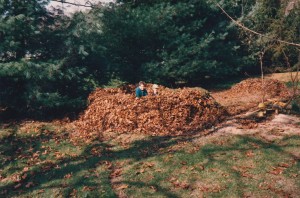 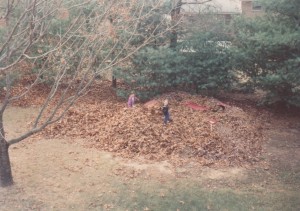 One winter a snowplow made the ill-informed decision to turn on the hill and got stuck, gouging the road in a way that forever increased the difficulty of rollerskating down Eheart Street to a double black diamond. One fateful day I tried to keep up with the older kids by turning down it after my usual course – the blue run of Alleghany Street. They were already at the bottom when I made the decision so I hadn’t seen the way they weaved like gold medal slalom skiers to get there. Charging straight down seemed the best tac until I hit that gouge and jettisoned into the air, landing with a crunch in a gravel driveway, a single rollerskate continuing on. I will never know how it got off my foot, laced up as it was, leaving the bottom of my foot riddled with asphalt. Scared of the repercussions of honesty, the big kids convinced me to operate on myself using tweezers. I was never good at that board game, to this day I’m too easily distracted for frivolous things like steady hands or coloring inside the lines. One piece in particular would not come out and I eventually gave up. My foot healed, the black rock still visible for a time, until it just disappeared one day, like a ghost in a mirror.

Four years passed in this blur of a Calvin and Hobbes-esque imagination, freedom, and character building before the inevitable switch between which parent my brother and I lived with. And so we loaded back into the cab of a U-Haul, now more cramped with our pre-teen selves, and Furball in a crate. He lived in a cage under the kitchen table and died not long after. I consoled myself by imagining his last days were full of visions of his past glorious self, roaming his back porch domain. We lived on a busy street, so gone were the days of rollerskating or sitting in gutters telling myself stories of my own greatness. Perhaps as much a result of my impending puberty as anything, my poems turned away from nature and simplistic ideals, and towards angst and loss and loneliness even in a crowd.

It took me decades to remember that girl who grew up at the corner of Alleghany and Eheart, whose true loves are nature and introspection and writing, who is adventurous and scared, a bit of a follower but manages to fool everyone. I probably would have lost sight of her even if we had never moved away. But a single memory from those four years is all it takes to remember her, and embrace her and all she’s done for me.

I see the dogwood tree

Standing there all alone

It makes me remember the time

That I was home, alone

I was very lonely with no one else around.

The winter-time grass must feel the same

With only a few live blades left upon the frozen ground.

The dogwood tree has to wait

So does all the grass

But I, I just have to wait

Until someone comes home.