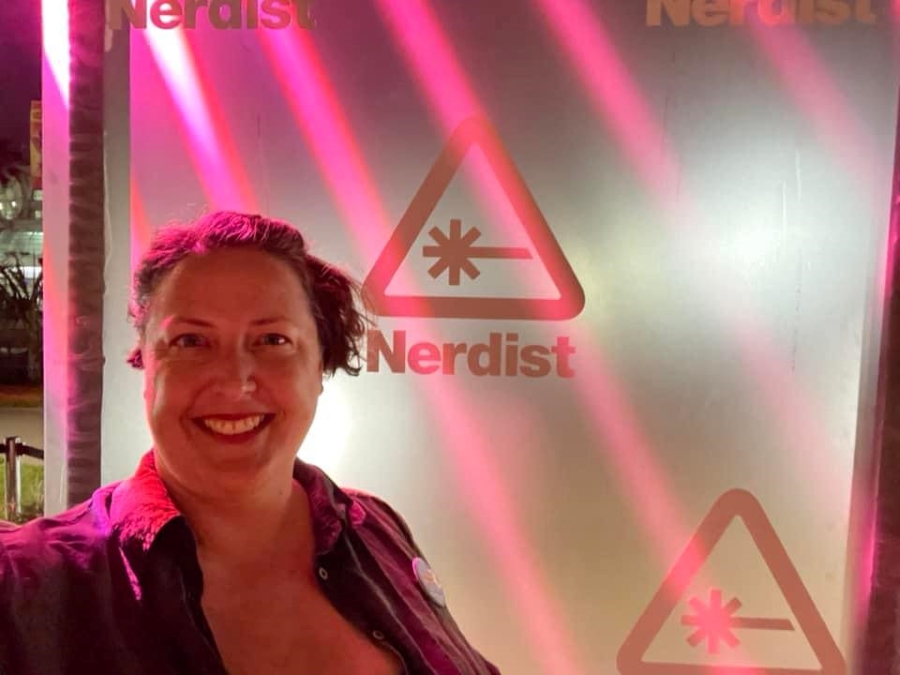 When people ask me how to become a science writer, I have lots of advice and am always happy to share my story about how I got where I am. But I also know I’m not done, it’s an ever-evolving career for me and I’m open to the priorities changing, my focus shifting, and the likelihood that I’ll get distracted by shiny objects. I hope any and all of this helps those considering a career change in general and those interested in pursuing science writing specifically.

A brief history is that I’ve always loved writing, dozens of childhood and young adult journals can attest to that. I’ve also always enjoyed science (except physics, it’s stupid). I was drawn to biology and exploration in particular. I got a B.S. in Ecology, Behavior, and Evolution Biology from UCSD in 2003. While working as an administrative assistant in a chemistry laboratory after graduating, I got to run some experiments and get back into doing science again. I started volunteering at the Birch Aquarium at Scripps to be around like-minded folks and found that very rewarding. From there, I volunteered on two research cruises to try my hand at oceanography and was instantly hooked. In 2009, I found a chemistry job going on research expeditions around the world and did that for nearly 12 years before the pandemic took the last vestiges of fun out of it.

I had already been working towards a science writing career, preferring that to bench science. In 2016, I was put in charge of blogging and social media for the new research vessel Sally Ride. People in my department knew I liked to share updates while at sea and I got to do it part-time for nearly a year without changing my employer or anything like that. It was an amazing opportunity and definitely changed my life. The Sally Ride project was the hardest I’ve ever worked and yet the most rewarding job I’d ever experienced. I got to interview scientists, learn about their projects, and then disseminate that for the public. I helped with an exhibit at Birch Aquarium and was consulted on a bunch of other side projects as well. And then the funding ran out and I went back to being a chemist full-time. I still got to blog occasionally, but I decided to pursue science communication as a career.

That’s literally the first step: decide to do it. And tell people! You never know where a job or opportunity is going to come from so the more people who know it’s your goal, the better!

Step two is to sign up for every newsletter and follow every social media account you think could be helpful. People who have the career you think you want, organizations that hire freelancers or tell the kinds of stories you’re interested in writing, whatever else you can think of. Reach out to any science writers or communicators you know and see what they’re up to. I recommend The Open Notebook’s newsletter, which has reported pieces, writing tips, diversity guides, origin stories of other science writers, and a whole list of other resources and advice on how to get started.

Third step: sign up for your local science writers association. If you’re in San Diego like me, that’s SANDSWA, but there are chapters all over. Go to networking events and meet members. I was lucky that SANDSWA was just forming when I did my google search. It’s been an invaluable resource. I found out about the range of jobs that fall under the science communication umbrella. At the time (2018), it was a lot of university jobs and medical writing for the biotech industry. I do not plan to leave San Diego so I tried to fit into one of these niches. Now there are a lot more remote opportunities and I recommend playing to your strengths rather than narrowing your focus. SANDSWA was incredibly welcoming to those of us who were not yet science communication professionals. It’s also where I found out about the UCSD Extension classes, many of which are taught by other members.

For me, the next step was to take classes. I did the science communication certificate through UCSD Extension. Because of the pandemic, most courses are still online, which means you don’t have to live in San Diego to benefit. It’s a total of 5-6 classes, each costing a couple hundred dollars. I did the internship as an elective and highly recommend anything like that you can find, its built in structure and mentorship helped me immensely. There are also options at many community colleges that are relatively cheap. I did also take writing classes at San Diego Community College in creative nonfiction and documentary scripts even before I decided on the career change. There are also journalism classes and other specialties so see what’s offered near you. Another route is the UC Santa Cruz program which is full time for one academic year. I have heard nothing but good things about it but knew it wasn’t for me because, at the time at least, it would have required a move. For those younger and/or less settled, it may be a good option. I also joined a local Toastmasters group and practiced everything from conversation to long speeches.

I definitely want to emphasize how long the process was for me. Funding for the Sally Ride project ran out in mid-2017 and I got my job at Nerdist in March 2022. So science writing was a side hustle for me for about five years. That was a decision I made because I didn’t feel comfortable or experienced enough to leap in without figuring some things out first. If you’re in between commitments right now, you may be able to just go for it in a more compressed timeline. Side hustling when you have a full time job, family, a social life, etc is a lot of work and requires balance. And, for me at least, endless to-do lists.

While it’s against some of the other advice you may see, I think that writing a few things for free really helped me. I volunteer with the Fleet Science Center and wrote a few blog articles for them. I pitched pieces to some prestigious outlets knowing that they don’t pay for online content. Friends and acquaintances saw my articles in Scientific American, Nature, and AGU and got in touch. They started thinking of me as a science writer and that led to other opportunities. What are the publications in your field that have columns or blogs that accept freelance pitches? Sign up for their newsletter, drill down on their website, and find the right editor to pitch. Then learn how to put together a good pitch. Again, The Open Notebook is great for this, they have a database of successful pitches. Make sure your idea hasn’t been covered before and that your opinion, point of view, etc is unique and, if possible, timely.

I did also pitch places that pay. My first pitch was to Star Wars Insider magazine, the official Lucasfilm outlet. And I’ve now written nine articles for them, about half were ones I pitched and the others the editor brought to me. When you turn things in on time and bring your enthusiasm, people want to keep working with you.

Freelancing is also how I started with Nerdist. I sent in one freelance piece, which got heavily tweaked into an idea for my first article. Working with them was great and months later I sent in another five or so pitches and they chose one. When Nerdist had a staff position open (which I found out about because I follow them and the editors I worked with on Twitter), I applied.

So now that I’ve changed my side hustle into my nine to five job, what now? Well, I’m certainly still doing a side hustle. I got in the habit of being busy, but also I really love the convention work I started during the pandemic and can’t give it up. I’ve now run science panels at six geeky conventions. All on a volunteer basis. I am hoping something comes of it professionally at some point but for now it’s nights and weekends and I do it because I love it. I wanted panels like this to exist. Basically, I saw a gap and decided to fill it!

For others who are considering leaving their jobs as scientists to become science writers or communicators, welcome! There’s a lot of us, whether technicians like me or even people who got a PhD and then decided they’d rather share science than do it. As I mentioned earlier, figure out which outlets in your wheelhouse work with freelancers. While that may be an unpaid op/ed piece, it gets seen by a lot of people and doing a few of those definitely helped me.

Another piece of advice is to find your brand, which sounds so corny. You don’t have to pigeon-hole yourself, but knowing your strengths can save time and energy. I always gravitated to articles about the intersection of pop culture and science. For awhile, it was a hobby and I mixed in those pieces and convention panels when I wasn’t working towards a job within UC San Diego. But years in, I didn’t gain a lot of traction looking for a fulfilling job in the academic environment. Many things I considered dream jobs at the time eluded me. Either I wouldn’t even get an interview or nothing came of it if I did. These were jobs I knew I’d be great at and even some where I knew people working in those departments. It often seemed like they were looking for a unicorn, someone with experience in both science and journalism willing to take an entry level position. It was very frustrating and I’m honestly still a little raw from how it all went down. But I’ve leaned into the pop culture hobby and Nerdist is obviously the perfect spot for me right now.

Deciding what field to work in is important. If you want to be a journalist or reporter, those are different classes and assignments than if you want to make videos or manage social media accounts. This is where connecting with as many science communicators as possible comes in handy, especially if you can meet them through your local science writers association and ask questions. They didn’t “get me” at UCSD so I eventually moved on. If I had understood this sooner, it could have saved me time and energy. So hopefully it helps you.

I feel settled in at Nerdist, but that doesn’t mean I don’t have both good and bad days. But I love working from home and the rest of the staff are good people, so it more than evens out. It may take me another few years to get asked to do bigger things, get invited to more parties, meet more creatives, and all those other things that would make it a “dream job.” The journey isn’t over and realizing that helps with the inevitable FOMO and imposter syndrome without making it feel like I’m paying dues.

I will probably also not stop thinking about the false starts I took, the “what ifs.” What if I figured out this was my path 20 years earlier? What if I stuck it out in academia and continued to enjoy cheap benefits and a healthy pension? But there’s nothing for it. This is my path. I am here, I am on it. And I’m excited to see where it goes.