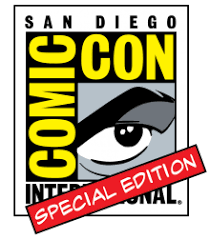 I’m excited to attend my first in-person convention in more than two years next week! And while the Comic Con Special Edition lineup is very different from what we’d come to expect from Comic Con, that’s not necessarily a bad thing. Here are some panels that explore the intersection of science and pop culture that I’m excited to see.

Starting off with three that I am actually involved with. That’s right, for the first time I will be onstage at Comic Con! Hopefully this will be part of my new normal. I am a volunteer for the Fleet Science Center in San Diego and they have been hosting panels at Comic Con for a few years, so it’s a perfect partnership. I hope you’re able to join us! If not, look for the panels to be shared on their YouTube channel soon.

The “Science” of Fast & Furious

The Science of Star Wars

There are lots of other great science / medicine / academic panels. I’m hoping to make it to a bunch of these!

Psychologists are out in force at Comic Con this year (probably just as well!). There’s a Comics and Psychology panel, one about our fascination with apocalypses and stories of doom, one about portrayals of trauma, and one about the holidays. Some psychology for every occasion!

Of course there’s a few panels dealing with COVID. One is about physical and mental health while another shares survival tips from pop culture. And there’s also going to be an exhibit about comics during COVID at the Comic Con Museum in Balboa Park.

One I am super excited about is the podcast Hi Everybody! The Bad Medicine podcast’s holiday panel. I’ve long contended that Kevin McCallister in Home Alone did some serious damage to those burglars! Another medical panel covers the technology needed to make humans into superheroes.

NASA / JPL returns with their popular No Trucks Beyond Mars panel.

Science literacy is more important now than ever and even Comic Con reflects that! STEAM Superstars hosts a great lineup and there’s also a panel addressing conspiracy theories and propaganda. Plus one about how comics can be used in education.

And while slightly outside the definition, The Legal Geeks put on some of my favorite panels, I love the way they overthink! This year they’ve got a panel about Ghostbusters and one about the holidays.

I am hoping to make it to as many of these as possible. What other panels are you interested in?