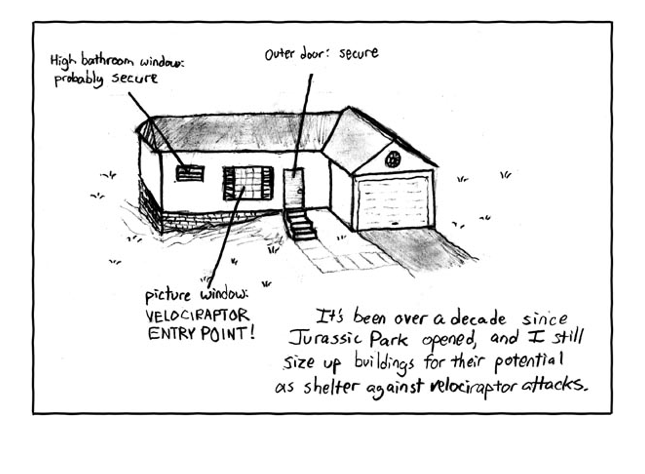 ** This post was written as an assignment for my Digital Journalism class through UCSD Extension. It’s a revision of the story originally posted here.

Ever wonder how to survive onboard an airplane attached to the space shuttle if the pilot becomes incapacitated? Perhaps not, but Randall Munroe has that random life-saving information anyway. Munroe recently participated in a San Diego Comic Con panel titled “How To: Absurd Scientific Advice for Common, Real-World Problems,” — also the name of his upcoming book.

On Saturday morning July 20, while thousands of fans were streaming into the convention’s storied Hall H for headlining panels from Star Trek and Marvel Studios, 280 people settled into Room 4. The capacity crowd, along with dozens who arrived too late and were turned away, came to learn about Munroe’s quest for science-based answers to random and ridiculous questions.

Miranda Osguthorpe admitted to an interest in those big Hall H panels, but chose Munroe’s instead. “There’s something wonderful and life-affirming about sitting in a room with 200 other people, sharing your love for jokes about spreadsheets,” she said.

Most panels at Comic Con use a moderator at a podium to direct conversation amongst a group of seated panelists. Munroe’s spotlight panel was different; it was just him. He stood at the podium, seeming nervous and glancing down at his notes often. A NASA engineer turned geeky artist may not have the stage presence of the big name actors on other panels, but Munroe kept his audience engaged with anecdotes and introspective humor.

During the panel, Munroe answered the space shuttle plane dilemma. His research led him to a conversation with well-known astronaut Chris Hadfield, a trained test pilot. Munroe admitted his goal was to ask increasingly outlandish questions, assuming Hadfield would eventually get annoyed and hang up on him. Turns out Hadfield can’t be fazed and gave thoughtful answers — all while waiting to board a commercial flight. Munroe’s audience laughed at the thought of the passengers in the boarding area listening to Hadfield describe increasingly terrifying aeronautical disasters.

Hadfield’s answer: if trapped on the space shuttle plane, get to the shuttle and detach it from the plane with the flip of a switch. Space shuttles were designed to glide to a relatively soft landing compared to a 747.

Fans in Hall H may have seen celebrities and heard breaking news about their favorite movies and TV shows, but those in Room 4 left with survival tips. Despite Munroe describing “How To”  as “the world’s least useful self-help book,” it was clear his audience would find space for it on their shelves.