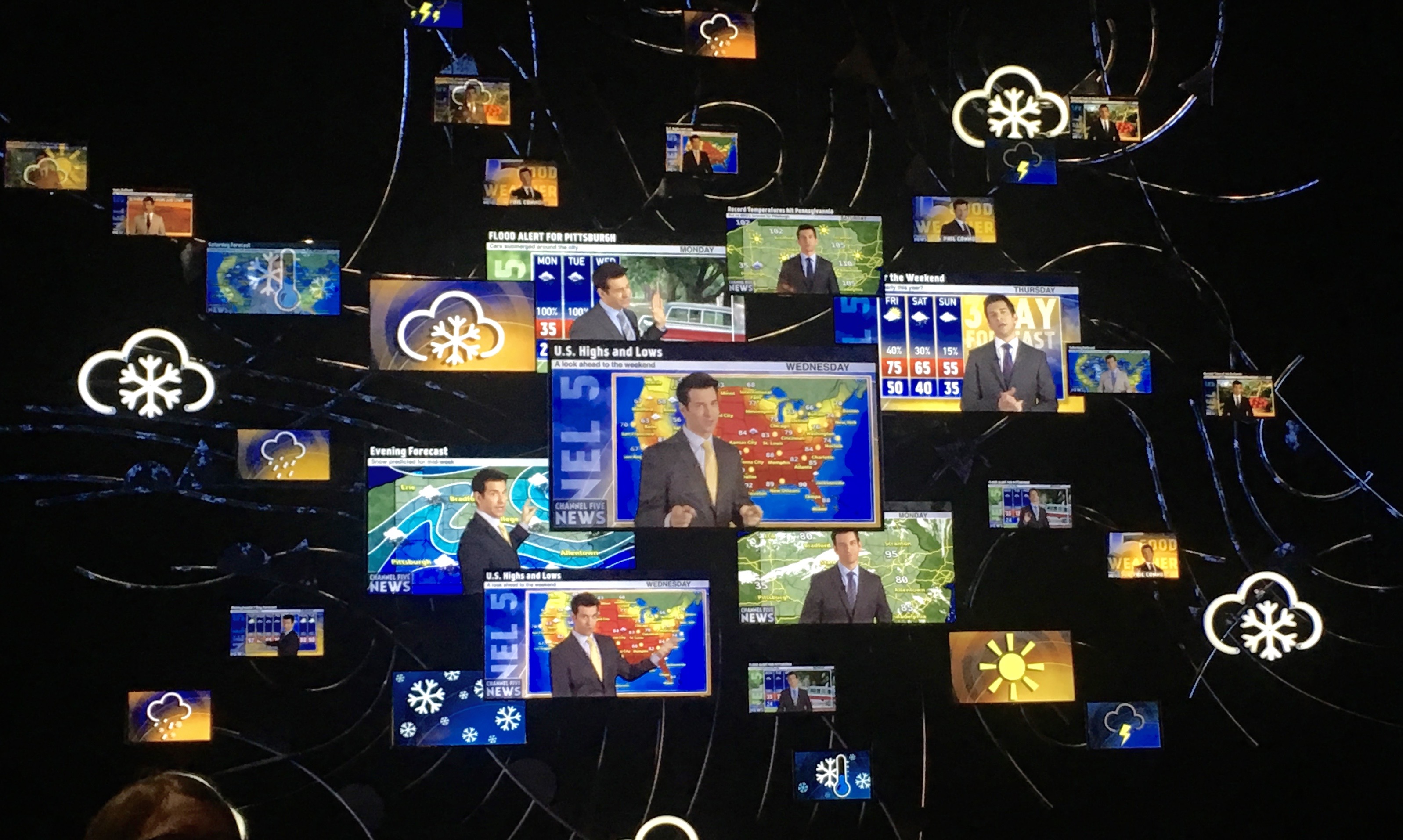 ***There are lots of spoilers in this post, though if you’ve seen the movie then you know the story. There is also cursing, as there is in the show – which makes me happy. I find it to be a lovely, melodic addition in both life and art.***

I wanted to get my obsession with this show posted before the Tony Awards are announced, lest I seem a band-wagoner after it wins. It’s up for Best Musical, Actor, Book, Score, Director, Scenic Design, and Choreography. And yes, it’s the only show I’ve seen so I have nothing to compare it to, but I can at least say that it deserves recognition in all those categories. 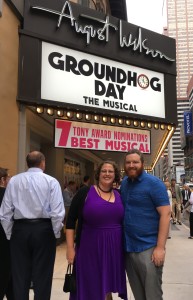 Look, I know I’m not the first person to be bowled over by a Broadway show. To walk out of the theatre dancing and humming, and immediately buy the original cast soundtrack and play it on repeat. But this was my first time on Broadway, and I absolutely loved it. And then I rearranged my vacation so that I could go back and see the show again the next night (my own little Groundhog Day repeat). So I’m gonna talk about it, obsess over it, and sing out loud in my car for at least awhile longer. Especially because I notice something new to love about it every time I do any of those things.

I’m going to start by submitting the theory that the universe isn’t doing this for Phil Connors. Did it decide “here’s a douchey white dude who deserves thousands of chances to be better”? No, I like to believe that the universe is doing this for Rita. It was like “you know who deserves a pleasant surprise? This person who is a joy to other people’s lives” and then it figured the easiest way to do that was by turning this guy she had a connection with into someone deserving of her. It figured “how long could that possibly take, like a few weeks?”

And that’s how we get to the heart of the story, Phil repeating February 2nd for who knows how long – decades at least. Bill Murray is a tough act to follow, but I’m not his biggest fan so it’s easy enough for me to allow for somebody else to slip into the role. And this is not just “somebody else.” Even before he tore his goddamn ACL on stage, Andy Karl was a badass. This role demands an intense range – physically, vocally, and emotionally – and he delivers. And yeah, he’s doing it all with a torn ACL. Professional athletes cry like babies and recoup for months from this injury. Andy Karl does eight shows a week. The first night I saw it, the audience applauded as soon as he showed up on stage. Moments later, when he swung his legs out of bed, revealing the brace on one knee, they applauded all over again. The second night, no one applauded either time (except me of course) – guess that’s the biz.

I was curious to see how the show would handle the necessary shortening of sequences on stage versus on screen, and it does a great job of making sure the audience can keep up. It plays out pretty similarly to the movie – Day 1: Phil is self-obsessed from start to finish. Day 2: the songs, dialogue, and staging sequences are abbreviated. Phil is stressed and confused, and rambles off a hilarious list of possible shit that’s happening to him, my favorite of which includes magic mushrooms and Aquaman. Day 3: he just goes around yelling “NO!” at everyone and freaking out. Days 4-? (maybe like 12) he seeks out every type of therapy in Punxsutawney, from nutritionist to Scientologist, leading to the song “Stuck,” before finally deciding that drinking his cares away is the way to go. Two hicks at the local bar make for good company and the fantastic song “Nobody Cares” includes hilarious harmonies from Raymond Lee as Ralph. The next day is perfection. Phil feels invincible when he wakes up neither hungover nor in jail after what I imagine to be Broadway’s first car chase sequence (I love a good car chase, and this one deserved the room full of gleeful applause it received). So of course he decides to rob a bank, make it rain, and end up in nothing but his undies, a full-length fur coat, and stunner shades in the local diner. The song is “Philandering” and it is so relatable – we would all have those days. Seriously, don’t act like you wouldn’t.
Anyway, back to Rita. At the stage door after the show, as Barrett Doss signed my Playbill, all I could think to say was “I’m so glad they gave her more to do.” Her reply? “Me too!” But seriously, this is a big point. And to me it’s very important that the book (the story and dialogue that get us from song to song) was written by Danny Rubin, who wrote the movie along with the late Harold Ramis. He helped create this character, who is already above average when it comes to cinematic female love interests in the 1993 film. And now she gets even more flushed out as an associate producer sent on assignment with talent that everyone warned her would be an asshole (“and he is”). This being a musical makes it easier to get to know her – songs include both internal and external dialogue, so the audience gets more insights than in a film. Rita’s song “One Day” about being “a little complex” to end Act 1 is great. It’s part soliloquy and part mixed in to dialogue with Phil once he finally manages to get as far as a dinner date with her. In it, she admits that thirty years after playing with Barbies she still has messed up ideas about what it is to be a woman, and how wanting a man and a relationship fit in to her life. As she says “One day, some day my prince will come, so the fairytale said. Thirty years later it’s still in my head that if I screw a frog, I will wake in a four-poster bed.” Same, Rita. Same. 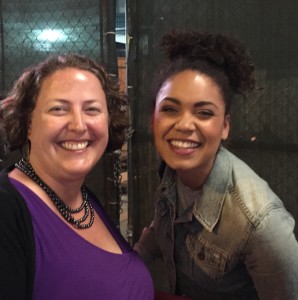 The dinner date doesn’t get Phil anywhere, despite repeated attempts to learn the script he thinks will get her interested. I like that the typical date stuff doesn’t fool Rita – propositions over drinks, small talk at dinner, pretending to want children – she’s not feeling it. And while I’m not saying that a disruption of the space time continuum is necessary to find love in your 30’s or 40’s, I do like that the general feeling is to be your best you and then you’ll attract the right type of person. Like many people, I have wasted a lot of energy in my lifetime by forgetting this rule repeatedly.

The sequences of Phil trying to bed Rita are well done. She clearly has moments where she finds him charming, but is always on guard. I love singing along to the line “I brought you candies, can I get in your panties?” To be clear I don’t think he’s only interested in her because she’s a challenge. Maybe at first – I mean, we all like a good pursuit. But the fact that she’s unpredictable is the real attraction – what could be more of a lifeline to his humanity than someone who is cheerful and keeps him guessing? They spend a day together, years in to his ordeal at this point and in his phase of finding new and interesting ways to die. I’m not sure what’s different about this day, but he finally tells her what’s happening to him – and it’s beautiful. If there is a snippet played during the Tonys to show off Andy Karl’s acting, it should be him sitting on the bench, telling Rita he’s a god, Punxsutawney is his domain, but there are things he’s missing out on: birthdays, growing a beard, ever being warm, a decent cup of coffee. And her response, the triumphant song “If I Had My Time Again,” is a breath of fresh air and is enough to put an end to the suicide montage.

As it was in the movie, it’s heartbreaking to me that everyone else still has to live out the rest of the day once Phil is dead. Rita and Larry (the cameraman) identify the body and wonder what signs they missed. His family must get a phone call. I recently realized that there’s no way for him to know this. I wonder if he would have made different choices if he knew. It’s during the suicide montage, while singing the ironically titled “Hope,” that the staging really gets impressive. There are tricks and misdirections in order to get Andy Karl back in bed to be woken up after his various deaths. Even when I went the second time, when I knew it was coming and had planned to watch carefully for how they did it, my attention was successfully diverted and I missed a few.

The supporting cast is strong, and there’s a lot for them to do (even if it’s often the same thing over and over). For me as a part-time creative type, the fictional distractions I really enjoy are the ones that inspire me to think about the entire universe they create. Not just the main characters, but what the others go through, what led up to these events, and what happens next. The scientist in me wants my own alternate universe, where I can test out different theories. Like what would be different if he had been home when this happened, as opposed to being marooned in a world of strangers? Also, Phil’s going to have to tell Rita that this happened to him, right? I mean, she took it pretty well the first time he told her. And he knows way too many details about her to play off without seeming like a stalker. 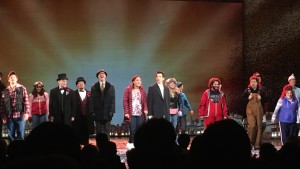 The final day is all you could want from a finale. Phil mostly goes about his errands of saving cats from trees and sharing moments with the people of Punxsutawney, making time to buy Rita boots to warm her always-numb toes and bring her chili from the local cook-off. I think the important step, what made the universe decide to stop fucking with them, is when both Phil and Rita admit “I know nothing” in the gorgeous song “Seeing You.” A far cry from Phil’s lovely but sad song “I Know Everything” which he used to get Rita to believe him about the time loop on a previous day, and again after she’s helped him find hope in the situation. In overlapping lines, he sings about still being surprised by her while she admits she thought she knew everything “about men like you.” She surprised him every day for decades, he finally managed to surprise her, and tomorrow finally comes.

There’s so many more little details I loved, and undoubtedly many more I didn’t even catch. For now, I’ll leave you with my favorite line (from Rita of course). “If I had my time again I’d take the path less trodden, avoid the crap I trod in. Read a lot of books, and I would worry less about my looks. And I would be a lot more zen. And I would punch a lot of men.”

I hope this inspires you to treat yourself to some Groundhog Day goodness.

Here’s some articles I recommend:

On the importance of a diverse cast

Or, you know, treat yourself and go see it! http://www.groundhogdaymusical.com/tickets/